I am a New Adult (Again)

When I was 18 years old, I could not wait to leave my boring, suburban hometown and go to college in the city of Boston. And even though Boston was only a 40-minute drive away, I was convinced that moving to the city had the power to magically transform me—80’s movie montage-style—from a chubby, overachieving nerd, into the glamorous, urbane sophisticate I was no doubt destined to become.

I began my metamorphosis by drowning my former Student of the Month persona in gallons of cheap vodka, while my inner good-girl was smothered in a wardrobe of all black.

The strange thing was, I had this one professor who somehow managed to see through my shroud of pretension and catch a glimpse of the real me.  Over the next four years, she frequently sought me out, encouraging me to get more involved with the university and become a student leader. I spent four years dodging her requests.

And yet, I found myself oddly tempted by the idea of revisiting my inner go-getter. Because somewhere hidden deep inside of me—though, evidently, not quite as deep or hidden as I thought—was a motivated, hard-working kid who didn’t really want to waste her entire life stumbling home from nightclubs at 3:00am. I was enthralled with the idea of a life of reckless hedonism, yet I could no longer ignore the ambition roiling inside of me, the desire to live out my life-long dreams, or at the very least, to get sh*t done.

Shortly after graduation, I began to reconcile these two disparate halves of myself, retaining just enough of my free-spirited proclivities to make life enjoyable, while making sure to carve out enough time to honor my inner over-achiever. I was only 23 when I started to shoot my debut feature film and my former professor was the first one to pull out her checkbook. 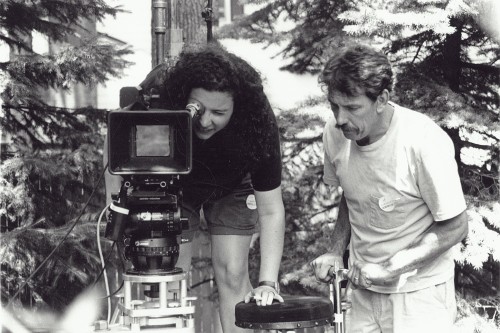 I spent the rest of my 20’s pining for and simultaneously reenacting my college days. It was the 90’s, and my generation pioneered the concept of prolonged adolescence, formerly known as “slacking,” which, in turn, spawned the rise of the pervasive Man Child[1] phenomenon of today. Sure, I worked for a living and (mostly) paid my own bills. But none of my friends actually had it quote-unquote together, and as we drank our nights away at the local pool hall, we laughed over the  fact that anyone in our youthful, fun-loving age bracket actually gave a crap about bourgeois, old-people things like 401Ks, biological clocks, and marriage.

Then thirty came, hitting us like the slap of a screen door in the three-decker Allston apartment we were too old to still be renting. We certainly weren’t kids anymore. We were freaking thirty.  So where were our amazing careers? Where were the new cars and engagement rings? In a phrase: What the hell was wrong with us?

For me, turning 30 was the beginning of my adulthood, though true adulthood didn’t come until I became a parent, at age 34. Looking back, I don’t regret my extended stay in Never-Neverland, and judging from my resume (two features under my belt by age 28 and various TV-producing jobs) I can’t exactly call myself a slacker. But I do wonder what I might have achieved if I’d followed the path suggested to me by my old professor and given in to my ambitious side way back when I was still in college. I also wonder what I would have lost by giving up those extra ten years of my youth.

I spent my twenties fighting adulthood with everything I had and my thirties learning to accept it. At 43, I fully embrace my adult self, though there really isn’t another choice. Which is why I believe it’s entirely possible that New Adulthood is more than just some marketing scam cooked up by YA publishers.  I am a New Adult now, for the fourth or fifth time over. Maybe all of us always are.

[1] For more info. on the Man-Child, watch an early Judd Apatow film.

Hilary Weisman Graham is an award-winning screenwriter, filmmaker, and the author of the YA novel Reunited (Simon & Schuster), now available in paperback. http://www.amazon.com/Reunited-Hilary-Weisman-Graham/dp/144243984X/ref%3dsr_1_1?ie=UTF8&qid=1321630047&sr=8-1